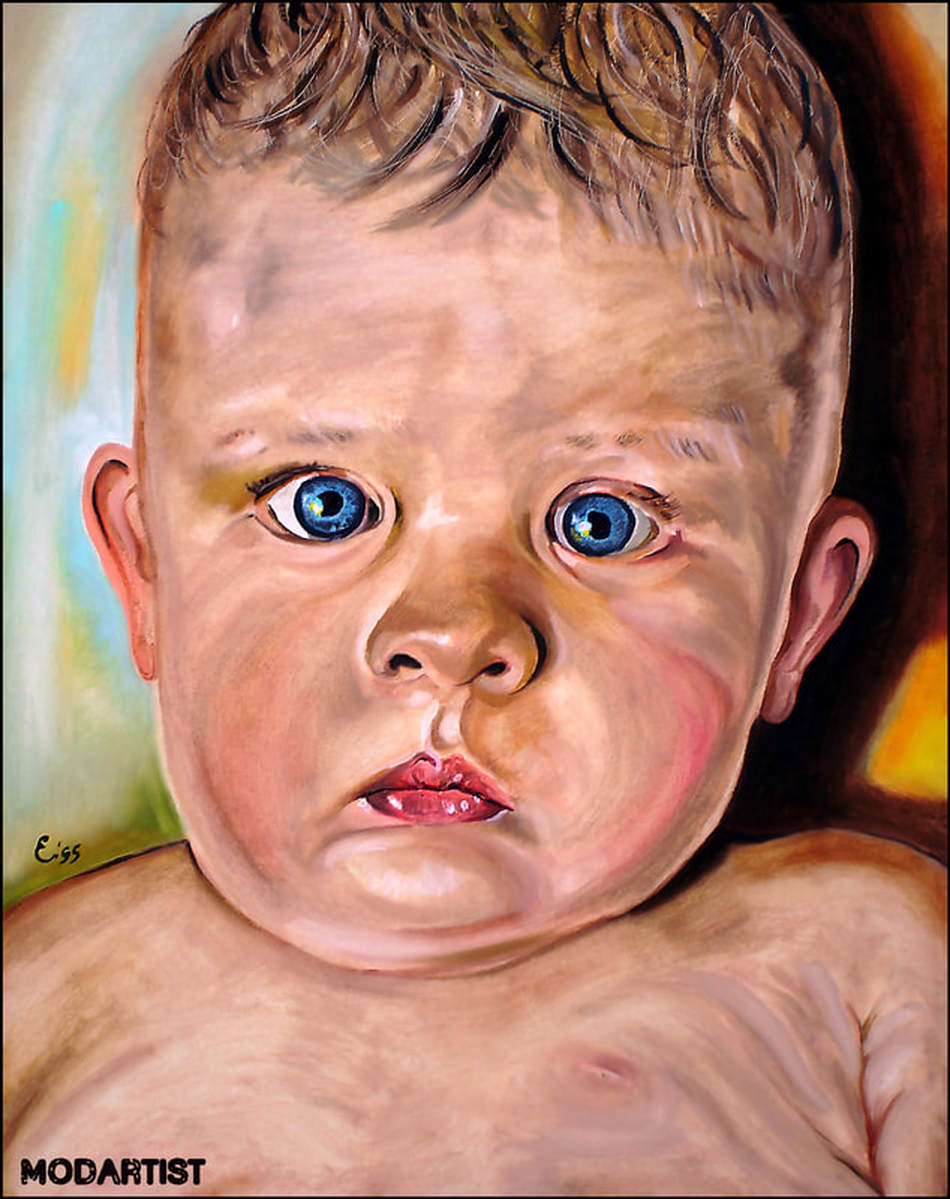 The Infant Kyle • Oil On Canvas • 16 x 20 By EricScottBloom ©MODARTIST.

So when my son, Kyle Eric Bloom, was born on December 1st, 1994, I knew from that moment, on that day, my life would never be the same, and that something truly remarkable would emanate from his entering the world. At that time I had been seriously painting since 1983, and at that particular time had been devoting a lot of my painting to learn the nuances of Portraiture, although I had an equal passion for Abstract Expressionism.

One Arizona Autumn morning, a happening occurred to me that would eventually lead to my creation of what I enjoy referring to as The Great American Portrait. It was early morning, and I was sitting at my desk, writing an essay, on of all things, portrait painting. Kyle was in his diaper, sitting a few feet away on our big leather couch, comforted among big piles of freshly washed laundry. I looked over at him, and saw my infant child; so tiny and so soft, noticing an expression on his face, as he stared a frozen gaze at me. This was an expression I had never really seen full-fledged before. It bore a sudden, particular connection between us, brimming with the most vulnerable appearance I had ever seen on his face before! Even the position of his miniature body seemed to carry a palpable curiosity to it. However it was his deep, blue eyes that contained the most intense look of vulnerability I had ever personally experienced. I was so startled and taken by the intensity of the almost hypnotic curiosity and wonderment in his big, azure-colored eyes, that I grabbed my 35mm Pentax SLR (there were no digital cameras then), loaded with Ektachrome slide film, sidled slowly over to him; two feet away, face to face, and before his expression changed, managed to click two frames of his beguiling combination of examining demeanor, and a glowering contemplation that held me in suspense. His expression was mesmerizing me. This tiny, little, semi-bald, blonde creature, was staring at me so intently, his entire expression seeming to say "WHO exactly are you? I have a feeling I Know you; but are you my Father? My Brother? Could you be my Uncle, or simply just the baby-sitter???" There was an intense, vibratory aura encircling his gaze. And it wasn't just me who was triggering his provocative wonderment. In those fleeting moments, it was everything  surrounding him. He seemed to be locked in a stare that was asking all the important questions. "Who are you; who am I?" And, possibly, "Who are WE??"  seemingly as curious about me, as I  was about him?!" Before I was able to take a third shot, he had come out of his infant searching, and was reaching out to me with both arms, giggling hysterically, at "Daddy."

A week later, I stopped off at Tempe Camera, and laid down the cash, impatiently awaiting to see the two images featuring my son's searching quest for Knowledge and Understanding. And there they were! Very slightly out-of-focus, as it was a dull light protruding through the curtains that had provided the light that morning. However, the slight softness of the images didn't bother me one bit, as I immediately realized that I had managed to capture my child's invariable mix of emotions and hyper-curiosity, creating a photographic record of what it might be like approaching two years old, and suddenly wondering who, where, and what you are, and especially in a moment of hypnotized wonderment about who the adult is, who is so unremittingly fascinated with you.

The finished slide was like a sculptor's bust. An infant from the chest up, to the very top of his head. And not only did his facial expression glow of innocent perceptibility, but his little body was propped up, as he seemed to, in the same, unsure, yet still loving fashion, proposing doubt, but Knowing and believing deeply, that the man with the camera was his very own, compassionate,
safe, nurturing father, and trusted friend.

The very next step was to use the magnifying loop to study the slide. After reflecting upon the photographic version, I placed the slide into the projector, and lined the image up with a 16 x20 canvas, with the plan to create an oil painting, based on what I saw plastered against the small canvas. I had painted so many portraits over the past few years using this time-honored method, however, for many reasons, I took three takes as much time, study, and concentration in creating this particular portrait. And not just out of a desire to create a face and body that told the story of what it's like to be a an infant, alone in a house with someone known as "Daddy," or to create a  professionally rendered , highly detailed set of features in oil; but much more importantly, to attempt to invoke a conglomeration of thought and emotion that had instantly grabbed my heart and desire, and stealing my love for this person who I knew would change MY  life, for the rest of His Life.

I'd completed the canvas in approximately four days, and everyone who saw it (on wooden and cement walls; not Facebook walls) had very similar reactions. They Knew, in their minds and hearts, that there was something most especially exclusive; obviously referential, that combined photographic and painterly diligence, which produced not just a portrayal of an infant in a momentary state of anxious wonderment, but of THE  infant, at his perhaps most unsettled, yet so obviously open to fatherly love.

Still thoroughly enthralled and excited a couple of years later, when I was given a gift, a primitive form of a personal computer called WEB-TV, I began posting the image on as many fine art-related websites as I could find. Not long after, I was the very first artist to win The Digital Consciousness Artist Of The Month Award, based solely on the portrait of Kyle, by a true gentleman,  Jonathan Eoyang, administrator. A couple of months later, I was shocked and bemused to receive an email from a high school student and budding artist, Sophie Hardbattle. She told me she had come across the painting surfing for a subject to create her college entrance thesis around. She told me when she saw the image, she knew instantly that it was Kyle's portrait she would write about, in order to attempt to get into the art college of her choice! She had been so entranced by the child's expression, so much so, that she wanted my permission to write her thesis, centered around the canvas. Of course I granted her permission. I was floating on a cloud. She interviewed me about my life as an artist, and asked a whole slew of questions surrounding the portrait, my inspiration to paint it, and how exactly the canvas came to be "born."

Well, I'm extremely proud to say that her thesis did indeed get her into a prestigious art college, and on a scholarship! She has been working as a graphic artist, very successfully, ever since.

I am currently seeking out a serious collector, interested in relatively uncharted painters (although I do have my own, tiny coterie of patrons and admirers), with a seeker's knowledge of modern art; an un-quenching thirst for finding and assembling the esoteric, and, the wealth to purchase this depiction of the human condition, thereby making it possible for me to continue on the path of the painter, creating as deep and wide an artistic legacy as I can muster in the remaining time I have on this planet, which I am creating and dedicating to my son, Kyle, the essence of The Great American Portrait.

To Contact me, Eric Scott Bloom, regarding this work, or my art in general, write to me via my Facebook Messages In-Box:
http://facebook.com/modartist
​or,  my home-based e-mail,
modartist@comcast.net